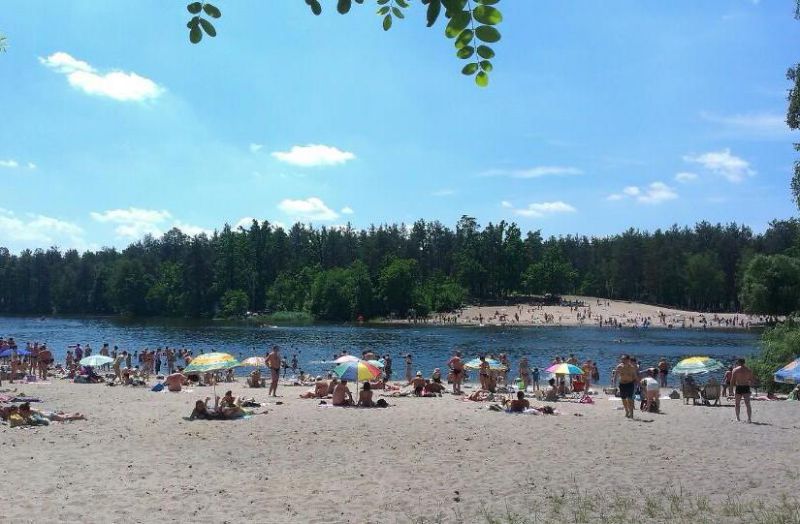 The hot summer has finally come and together with it the time of summer holidays.  So the question about the best beaches in Kyiv became popular again.

The situation with the beaches in the capital city is rather ambiguous. It is necessary to keep an eye on the latest news and pay attention to the signs “swimming is forbidden”, “swimming is allowed” or “not recommended to swim”.

However, there are always a few beaches, where it is practically impossible to be wrong:

The central beach is conveniently located on the picturesque shore of Trukhanov Island, near the parachute tower. Although it is a bit far away, it’s free, public, and cozy. An important plus is the developed infrastructure. It is much more convenient to get there than to the Postal Square over the Footbridge.

The Pushcha-Voditsa Beach has twice received the Blue Flag for compliance with the international standards. It is safe, comfortable and well equipped. It is located near the Gorashchyna pond in Obolon district.

It is a large and spacious beach, which is daily visited  by approximately 6 thousand people. It is remarkable for an interesting light-musical fountain, which is worth looking at. Telbin is located near the lake with the same name in the Dnipro district.

It is a less known beach near the strait of Chertoria that has everything that you need, including a medical center, a rescue point and fountains with drinking water. In high season, there can be up to 5 thousand people. The beach is located in the Desnianskyi district, on the island of Muromets, near the Druzhby Narodiv park.

The beach in Hidropark takes 20 thousand square meters. On hot days, and especially on weekends and holidays, there are gathered crowds of holidaymakers. The Dytyachyy beach is considered to be one of the most well-maintained and well-equipped one. You can rent sport equipment there. Also, you may find there the toilets, changing cabins and other amenities. There is a rescue-diving station nearby.

The beach on the Dolobetskyy Island is several times larger than on the Dytyachyy beach. Much more people can have a rest there.  On sunny days, the number of vacationers easily goes up to 10 thousand. The beach peculiarity is its picturesque landscape. You can see  Venetsiya and Truhaniv Island, the Rusanivsky Canal, and the Nikolskaya Slobidka from there. The beach is equipped with football and basketball courts. It is often cleaned up there.

It is one more beach on the Dolobec Island, not far from the Venetian Bridge.  The stunning view of the Trukhaniv Island opens from it. There is a possibility to rent there, also a dressing room and a cafe.

The golden beach is the best option for a relaxing family holiday. It is bigger with a fewer quantity of  visitors. There are dressing rooms and toilets on that beach. It is located on the Golden Beach in Hydropark, but closer to Patona Bridge.

It is a relatively small and cozy beach on Lake Radunka, on the Rainbow Street of the Dnipro district. Due to the large quantity of seaweed it is not very convenient to swim there. But you can have a nice rest in the countryside. You can sunbathe or  rent a catamaran there.

Verbnyy Beach is spread on the shore of the lake with the same name. This is a great option for lovers of depth. In some places, it exceeds 20 meters. At the same time water is quite clean there due to the constant circulation and underground springs. There may be about 7 thousand people in high season there. The lake is in Obolonskyy district.

If you do not want to worry about personal transport, please contact us. The company “Ukr-Prokat”  offers car rental in Kyiv of different brands, classes and capacity!