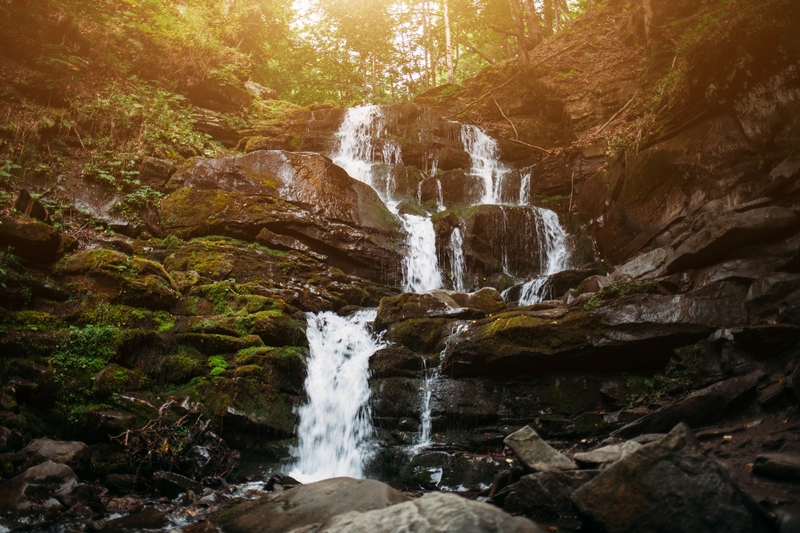 Ukraine can boast with its high waterfalls as well as marvelous green landscapes. And all these fabulous places are within your reach. Especially with a car rented in Ukr-Prokat. This time we will tell you about 5 most spectacular waterfalls that are definitely worth seeing with your own eyes!

It is the most famous waterfall in the Gorgany massif. It is about 15 m high and very loud, so it can be heard from afar. That is the reason why the loud Zhenetsky Hook got such a name, and the word “huk” literally means “waterfall” in the dialect of the locals.

However, Zhenetsky Hook is very young, as it appeared literally in the last century. Tourists love it not only for its beauty but also for its convenience. After all, even inexperienced travelers without the experience of difficult hikes will be able to easily get directly to it right from the highway.

Yalynskyy waterfall is the highest waterfall in Ukraine, as tall as 25 m. At the same time, it is quite wild, and the infrastructure around it is not very good. The most convenient route to get there is from the village Dilove, going towards the Marmara massif. By the way, the village is the official center of Europe.

Yalynskyy waterfall is located in the Rakhiv mountains. Be sure to wear comfortable shoes, because the climb is not very comfortable and rather steep. But all your efforts will be rewarded with the breathtaking view of the waterfall itself.

This is probably the most popular waterfall in Transcarpathia on the slopes of the Borzhava massif. Its height is 14 m. There are a lot of people here all year round, due to a number of festivals in summer, and the nearby ski resorts Pylypets and Podobovets in winter. By the way, the largest festival with the same name for informal youth was founded in 1993.

Next to the waterfall, there is the mountain Velykyi Verkh, near which, according to the legend, lived Ivan and Marichka. It was actually near it that they had been meeting on secret dates until their relatives found out their secret. The families are said to be so enraged that the thunderstorm started. A loud stream of water took steam from the cliff, and since then in the sounds of the waterfall can be heard their whispers.

The spectacular and beautiful the Prut waterfall is also called the Hoverla waterfall because it is on the way to the top of Hoverla. These are as many as six cascades, and the height of the largest of them is 12 m. The total height of the cascade is 80 m.

It is rather easy to find this waterfall because it is located directly in Vorokhta and all tourist routes pass nearby. It takes its waters from the Prut River, which starts at the foot of Hoverla.

It is not a separate waterfall, but a whole cascade the total length of which is more than 80 m. Its old name is Smotrytskyy waterfalls. The waterfall is located on the road between the village Dzembronya and Mount Pip Ivan. It is very convenient to combine a tour with a climb to one of the nearest peaks. But in case you want to see the most beautiful corners, be sure to take comfortable shoes.

If you divide the Dzembron waterfalls into separate cascades, the height of the highest of them is about 10 m. The most important thing here is not to stop straight away but continue walking in order to see all of them.