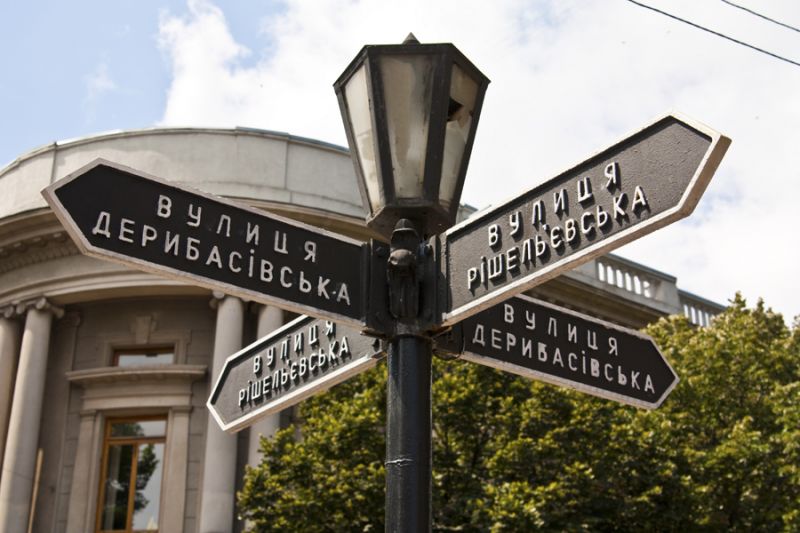 Derebasivska street is one of the central streets of Odessa and one of the main places of interest in the city. It is located between Preobrazhenska and Polska (Polish) streets next to Hretska (Greek) and Lanzheronivska.

Derybasivska is a real symbol of Odessa, immortalized in the Haidai’s film. Almost all the sightseeing tours start from that street. You may see there plenty of buildings from the 19 century. A lot of well-known historical, cultural and scientific figures visited it.

The road is laid out with a pavement. It is the first street in the city where granite that was imported from Naples was used for paving the way.  Those were the stones from the Vesuvius, which were order by Jose de Ribas. The strong material has survived so far.

Deribasivska itself is considered to be the main and central street. Although it is small and does not reach the sea, the townsfolk loved it for a special atmosphere. Most of the street is closed for cars. This is a pedestrian walking area. There are numerous shops, cafes, cafes and restaurants. The first Odessa City Garden adjoins Derybasivska.

The legendary street is mentioned in a lot of art works and songs, especially in typical Odessa’s. It is shown up in films as well. For example, in the “Primorskyy Boulevard”  1988.

There are street musicians everywhere and various events are held there. The street offers stunning views onto the Opera House. Finally, it’s just nice to walk.

What should you see there?

While walking along Derybasivska street, you need to look carefully at the sides. For example, A.S. Pyshkin worked in the Office of the Governor-General for two years. In another house, the legendary secret service agent  N.A. Geft lived for a year. Have a look at the memorial plaque of VV Kandinskyy, find the Isakovich House, admire the architecture of the buildings designed by architect G. Toricelli. At the very beginning of the street, at the crossroads with the Polska street  the monument of de Ribas was installed.

Garden City  is the another attraction. The park was founded in 1803, practically at the same time when  the city was founded. Felix de Ribas bought that piece of land and gave it for the city needs.

In the 2000s, there was a significant restoration. The singing fountain was built in the garden and a completely renewed indoor scene. The  symphony orchestra often plays there. Other monuments in the park are the monument of the lion family, Leonid Utyosov monument, the monument to the athlete and pilot Sergei Utochkin, the monument “The Twelve Chairs.”

If you want to enjoy your vacation, without worrying about the way and planning routes, rent a car  in Odessa! The company “Ukr-Prokat” offers models of different classes and capacity, for every taste!