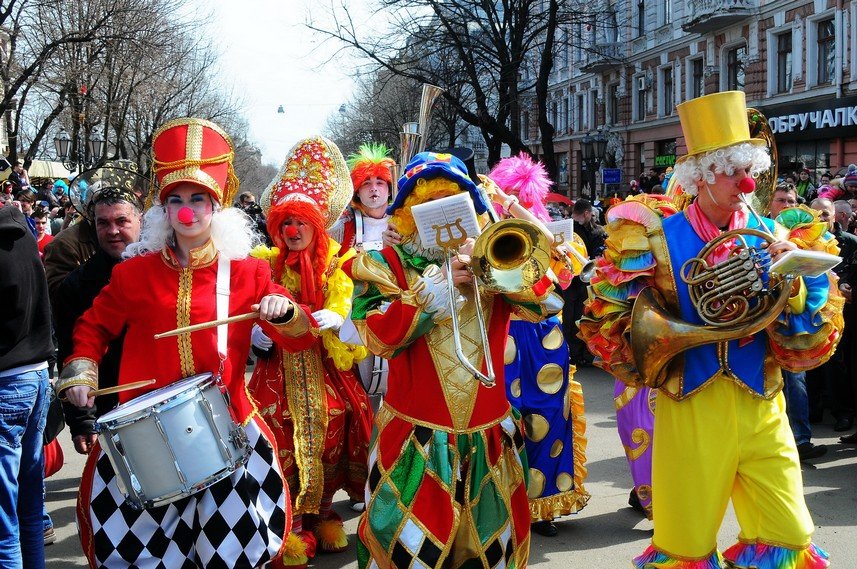 “Humoryna” is traditionally held in Odesa on April 1, the Laughter Day. The bright spring festival of laughter and joy with more than forty-year-old history has become an essential element of beginning of the period.

Odesa humorous fest is known far beyond the city and the country. Every year its providers impress with traditional festivities and come up with something new and interesting. Drawing of lotteries, concerts, performances and festive events are held all over the city.

The history of  “Humoryna” goes back more than forty years already. In 1972 Odesa team of  Club of Funny and Inventive players started up their own laughter festival. “Humoryna” name is a funny analogy with “Kinomarina” film festival that was made up by Oleh Stashkevych. In the meantime, Arkadii Tsykun suggested “Moriachka” (Seawoman) as the festival emblem.

For the first time the event was held already as early as next year. For several years it was held in a big way: carnival walking, stadium festivities, automobile parade, pops concerts, exhibitions, film representations, contests and competitions. But in 1976 governance was frightened by its unexpected agiotage and closed “Humoryna” down. It continued on incomparably smaller scale in Odesa institutes only.

In 1987 “Humoryna” made a comeback and step by step started picking up stream. Several years later Mykhailo Zhvanetskyi, the chairman of club actively brought comedy celebrities to perform on the best city stages. In 1997 even “Odesa Olympic games” were held.

In 2013 the fortieth anniversary “Humoryna” was held and it lasted two days under the slogan “Everything was made up in Odesa”. That was also when the first Ukrainian large-scale festival of living statues took place and where arrived artists from all over the country. The building of Clown House turned into the first in the world real embassy of Humor.

Citywide “Humoryna” had not been held in 2014 due to strained situation in the country. But Odesa natives conducted their campaigns and local festivities in order to take a rest, relax, take mind of things. Thus since 2017 “Humoryna” officially has been again on-stream on it big time.

In 2018 “Humoryna” will be held at its best in all, along with funny temporary locations in City garden and near Duke, Humor Parade on Derybasivska that has already became classic and along with international “Komediada”, the festival of clowns and mimes.

Since this year The Laughter Day falls on Sunday, jolly festivities will start even on Saturday, March 31. Concerts and spectacles will take place on main city stages, Souvenirs fair and Food festival will be unfolded on Hretska Square and in City garden there will be City of childhood for little guests.

Traditional Parade will take place at midday on April 1 on Soborna Square. The route of bright carnival walking is as follows: down Derybasivska Street to Katerynska Square, across Dumska Square and Prymorskyi boulevard.

“Ukr-Prokat” company offers car rent in Odesa for you to spend your vacation or weekend as comfortably as possible and not to match anyone apart from personal plans. We have big fleet of vehicles of various models and roominess, flexible prices and favorable rental conditions.