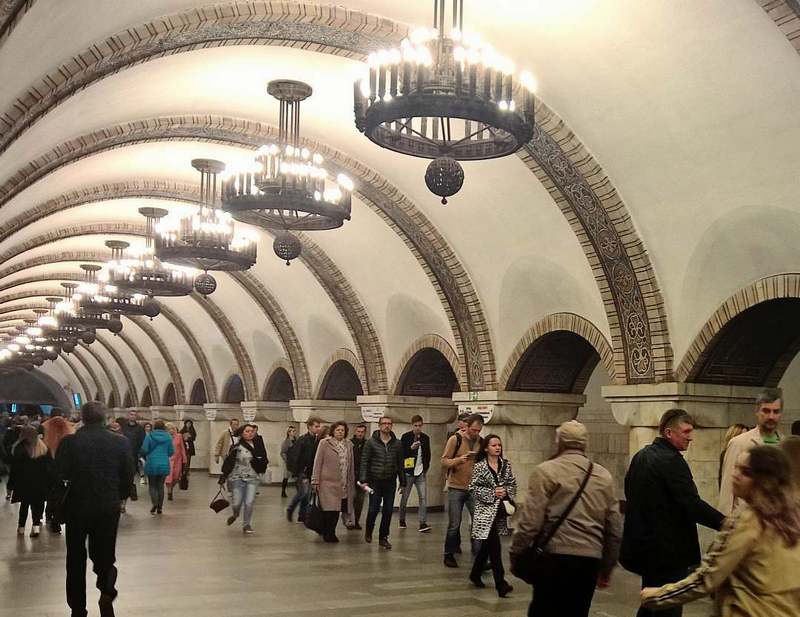 Kyiv subway is a major transport artery of the capital as well as its symbol and decoration. And for good reason some stations are considered to be architectural and historical monuments. For example, Khreshchatyk, Vokzalna and Arsenalna. Moreover, Arsenalna is the deepest station in the world. It is located at a depth of 105.5 meters.

Nowadays Kyiv subway has three lines with a total length of about 70 km. These are 52 stations, 3 of them are the major hubs in the center.

When planning a route, keep in mind that Vokzalna, Lisova, Petrivka and Sviatoshyn are considered to be the most busy stations. They have large hubs of ground transportation nearby. Passenger traffic is about 60 thousand passengers a day.

For the convenience of residents and guests of the capital, there are signs, information boards and monitors everywhere. This makes it easier to use the subway. New stations are equipped with lifts for passengers with disabilities. All stations have coverage of the main mobile operators.

Back then, it was the Kyiv subway that became the third in the USSR after Moscow and Leningrad subway. Today it ranks 29th in the world for passenger traffic, although the length of the lines is only 60th.

The subway is essentially a  diversified complex enterprise with dozens of units. In particular, those are 11 operational services, car repair plant, management and 3 electric engine houses.

If you want to learn more about the history, interesting facts and daily work of Kyiv subway, visit thematic museum. It is located on the second floor of the administration of the enterprise, and it was opened in 2000. Address –  35 Peremohy Avenue. Museum tours are free.

The exposition is located in three halls, and it is not by chance. The first subway trains consisted of this very number of carriages. All information is presented in showcases and thematic booths. For example, you can see the photo selection of stations at the time of their launch.

The first hall is fully dedicated to the opening of new stations and lines. There are pictures and documents from construction works here, personal belongings of the first employees and heads of the subway, awards and certificates. The real pride of the museum is the current layout of the station “Dnipro” on a scale of 1:87 with the first engine house and in the way those existed in the 60s. This makes it possible to understand how the carriages were lifted and how they were launched to the station.

The second hall is dedicated to the services and departments of the subway, current and former employees. There are also pieces of equipment, collections of travel documents, a variety of travel and other interesting symbolic details. The largest collection is kept in Kyiv Museum.

In the third room you can see the central clock of the subway, which synchronized working hours and intervals. There is also a model of the current reversing headshunt, documentation of the planning and design office and other interesting exhibits.

And if you do not want to deal with public transport and its routes, rent a car in Kyiv for convenient trips around the city! The company “Ukr-Prokat” offers a wide range of cars of different brands and capacity!