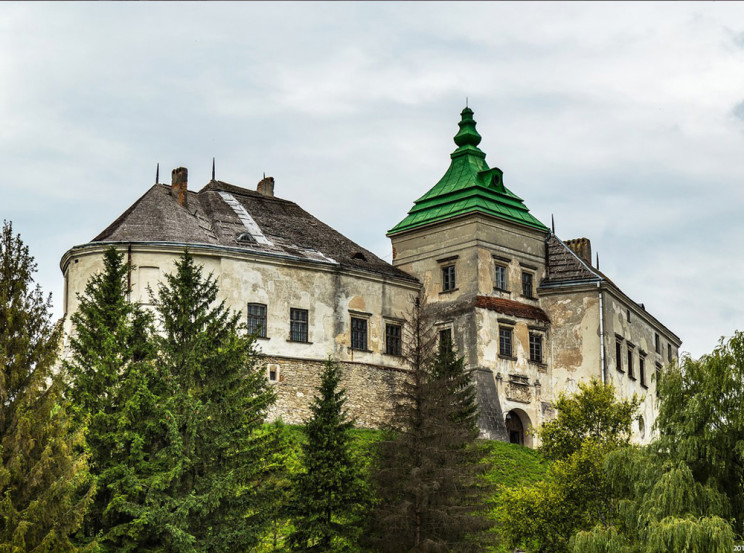 Not only Lviv itself but also its surroundings are full of various sightseeing attractions. One can spend way more than one day in search of something new and interesting.

But those who has not decided yet what to begin with, should draw their attention to the following important stops.

“Zolota pidkova” route includes the most famous castles of Lviv region: Olesko, Pidhoretskyi, Zolochivskyi. All they are located not far from each other, so that it is enough to take the car and follow the plan.

– Olesko castle – is a fortress in the village of Olesko, constructed in the 14th century. This is the place where Jan III Sobieski and Mykhailo Korybut-Vyshnevetskyi were born. The fortress crashed down after the earthquake which took place in 1830-s. Nowadays it has been renovated and there is an affiliate of Lviv national museum inside it. There are more than 1500 museum pieces in the museum.

– Pidhoretskyi (Pidhirtsi) castle – one of the brightest examples of combination of Renaissance era palace and bastioned fortification throughout Europe. It is situated in the similarly-named village. Its project was worked out by the Italian, Andrea del Aqua in the 17th century. The distance from Olesko castle – 15 km only.

– Zolochivskyi castle – one more heritage of the 17th century. In its time it was the palace, king residence, fortress, manor house, prison and educational institution. Currently here is reserve museum and art gallery. There are more than 550 museum pieces presented in the Grand Palace.

Tustan is a wooden rupestral fortress near village of Urych. It was located on cliffs and malm rocks and arose as defensive and borderline construction in th 9th century. It is considered that Tustan was built by the tribes of White Croats. Fortification enabled to control Great silk road and  Salty road (Via Salaria) that passed across Galician lands.

Over a period of several centuries the fortress had been reconstructed multiple times. In the 14th century it was passed to Polish army of Jan Kazimierz. The last record is dated back to 1565.  Nowadays it is the unique attraction of ancient Russian architecture of pre-Mongolian era and its territory – national conservation area.

Several million years ago there was a sea on location of modern Dovbush rocks.  But in length of time it escaped, having left rocks of unusual shape that arose high to 700 meters. Surrounded by legends, they attract tourists and fans of a history. Mountain and rock climbers are also always gathering here.

In ancient pagan times here was a sanctuary. With the advent of Christianity – strategically important priory that gave an opportunity to observe and control the surroundings. Afterwards Galician prince (kniaz) Yaroslav Osmomysl decided to build here a fortress to prevent Mongol-Tatar invasion. Since then a lot of creepholes, passages and secret ways  remained here.

The rock was named after Oleksa Dovbush, the leader of rebels called opryshky. His troops repeatedly carried out a raid on landlord’s and feudal lord’s lands, hiding themselves and hiding treasures among the rocks.

Zhovkva – is a little town near Lviv that was at one time the residence of Jan III Sobieski. A lot of Polish noblemen were buried here in the St. Lawrence church.

After the old part of Zhovkva had been reconstructed you can fully evaluate the past luxuriance of the town. All main famous sightseeing attractions has been located around Viche Maidan (Square). The main one is the castle, constructed by Stanislav Zhovkovskyi at the end of 16th century. It was conserved almost completely and now it has been reconstructed step by step. There is a museum inside.

“Ukr-Prokat” company offers car rental in Lviv for you to travel with comfort, not to miss anything and make it everywhere in time. We have big fleet of vehicles, favorable prices and flexible terms for everyone!