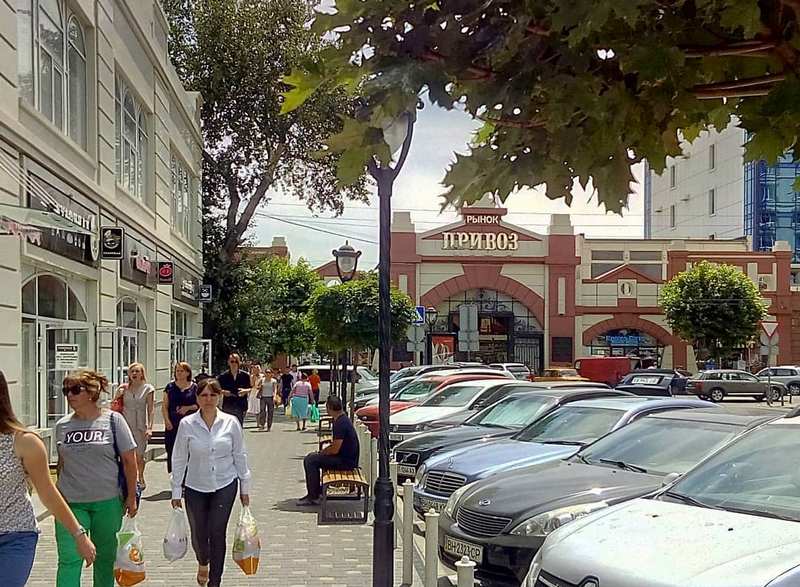 There is the saying  that Odessa begins from Privoz.  No wonder, since this place is popular far from its home town. Pryvoz, as one of the biggest and definitely the most colorful markets in Ukraine, has long become the visiting card of South Palmyra. It is the source of legends, sayings, countless numbers of stories and unforgettable purchases.

What did it all begin with?

In the 1930’s in Odesa there were three markets: Old, New, and Greek. The Pryvoz was only a small part of the Old market. It was called as Pryvoz, because  the merchants gathered on that square and traded directly from their hands or from the wheels, to be more precise.

Officially, the history of Pryvoz began in 1827. It was the time when the first covered building was built on that square. It was much more convenient, so very soon the indoor market in Ukraine became more popular than others. Besides, it was more profitable for traders who did not have to pay a market fee until the mid-1860s.

So, the new market booths began to appear gradually.  However, the records from that time say that the place did not look tidy. It was dirty and smelled very bad.  Definitely, it could not last forever . As the result, the first combined pavilions and trading rooms began to appear. Also, there were fully equipped separate buildings for cattle slaughter. The floors were concreted and the square was covered with granite gravel. All together it took them 10 years to finish all the above things.

In 1913, the other 4 two-story buildings were erected. The architect Fedir Nestruh worked on that project. The huge shopping center was not only practical, but also thoroughly thought out from an architectural point of view.

In the Soviet times, Privoz was renamed to the “Zhovtnevyy Rynok” ( the October Market), but the new name did not become popular and remained just formal. In the late 50’s of the 20th century the territory of the market was asphalted. Also, the separate buildings for dairy and meat were built.

Even at times when the Soviet Union had a catastrophic shortage of goods, it was almost not noticeable at the Pryvoz. It was possible to buy there food and branded clothes. If the person was ready to pay more, he/she could find any delicacies from red fish to black caviar there. Despite the fact  that almost all “foreign brands” were made in Maliy Arnautskaya str and it was not a secret for anyone, the Pryvoz still did not suffer from a shortage of buyers then.

Odessa Pryvoz in our time

Unfortunately, during the Restructuring period the market was in decline. In the 90’s there was agreed its reconstruction plan. In 2007, there were built the new places for selling fish and meat and two shopping and office centers.

Along the Panteleimonivska street there stretched a whole range of stores called “New Privoz”. At the same time there were erected two very popular nowadays monuments of Kostia the sailor and the fisher-woman Sonia.

It is very easy to get to the Pryvoz. It is located within the historic center, at the address  the Pryvozna street 14. It is next to to the bus station. The train station is less than a kilometer away. So, you can walk from there. It will take you from  5-10 minutes.

Most shopping outlets are from Odesa or Vinnytsia.  However, there are vendors from other regions of Ukraine there. It is still possible to find and sell anything on the Pryvoz. The market takes about 8 hectares, and the number of sellers is approximately 6 thousand people.

If you want to enjoy your time and have no problems of getting anywhere, you can just rent a car in Odesa! The company “Ukr-Prokat” offers car makes for every taste!