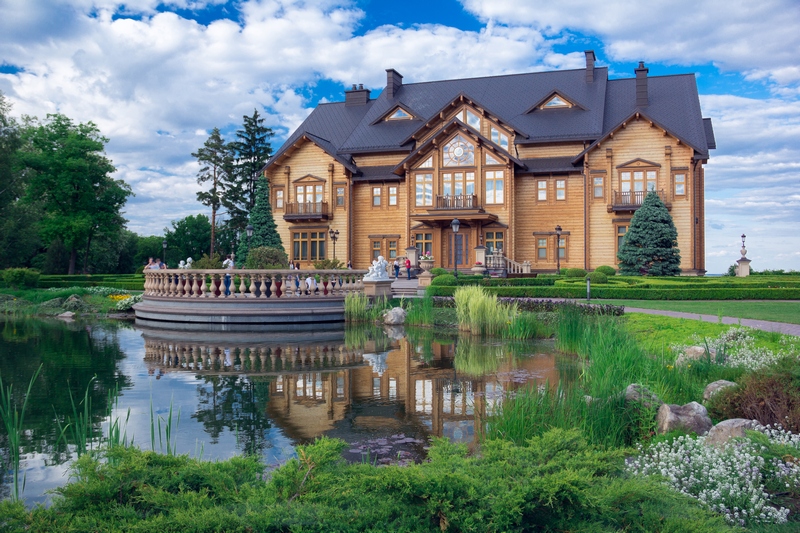 Thousands of Kyiv citizens have visited the residence of Mezhyhirya since it became available. No wonder that it is so popular. You can spend the whole day with great interest there! The only inconvenience is the road, because first, you need to get to that park. But we are always ready to help you with it and provide you with the entire large fleet of “Ukr-Prokat” in Kyiv.

Where did it all begin?

Mezhyhirya is a picturesque place near the river Dnipro. It is located in the Vyshgorod district, in the village Novi Petrivtsi just 14 km from Kyiv. Some time ago, there was a male monastery, and in 1923 a ceramic technical school. Later on, the government residence was built there. It was the home for Stanislav Kosior, Nikita Khrushchev, Vladimir Shcherbytsky, and Viktor Yanukovych. It was actually Yanukovych who finally turned the building and the territory into what can be seen now.

Now it is an open-air museum, where excursions have been held regularly since 2014. You can go for a walk on your own, visit the wellness complex, ride bicycles or electric cars, drink coffee, have a snack, or even go horseback riding. There is a bowling alley, shooting range, tennis court, and even a boxing ring.

What can you see there?

The territory of the complex itself partially resembles Sofiyivka Arboretum. There are plenty of plants and flowers on its territory (140 hectares). Some of them are rare species. The names of a lot of them are written on the plates.  And in the shade of leaves there are hidden charming sculptures and quiet gazebos.

The main building on the territory is a four-storey house. It was popularly nicknamed Honka because it is the name of the Finnish company  that was responsible for its construction. The house is made entirely of timber, and near it, there is a cascade of artificial lakes with fountains. There are plenty of fish of all colors in the reservoirs of Mezhyhirya, but it is forbidden to go fishing there.

The floating restaurant-ship has become another special attraction of the Mezhyhirya complex. It is located on the shores of the bay next to it. Inside there are several rooms decorated with marble, precious wood, gilding, and crystal. There is a huge banquet hall and even a separate office. Besides, there are three giant chandeliers in a niche in the ceiling. By the way, these are real works of art from the Spanish brand Mariner worth more than 90 thousand dollars per unit!

A special value is a local zoo, which is easy to find by signs. It goes to the right of the main entrance and impresses with its scope. There you may find the notorious ostriches, deer, mouflon, wild boar and other animals. There are many exotic birds, such as colorful parrots, bustards. Peacocks, pheasants, swans, and ornamental species of ducks are found throughout the park. There is even a separate pheasantry, where birds from all over the world live. Spotted deer can sometimes be seen among the trees, although they usually hide from the visitors.