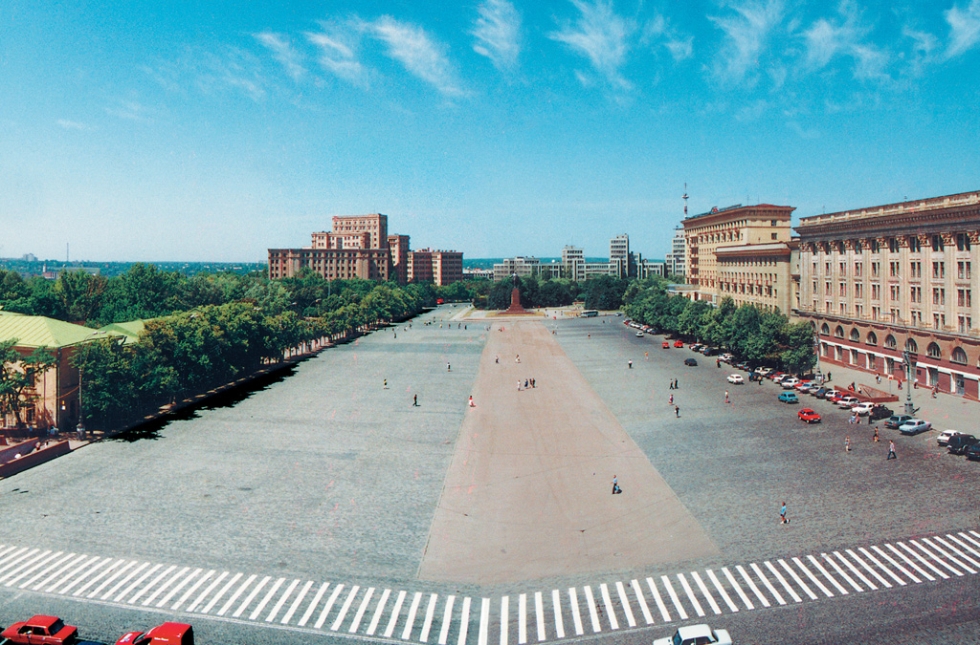 Kharkiv is an amazing city of contrasts, a treasure chest of charming green parks and squares, a small homeland of dozens of sculptures and fountains, and the former capital city of Ukraine. For centuries, Kharkiv city authorities have strived to make it special. The best universities, amazing ancient churches, and green alleys with monumental concrete buildings may be found here. Kharkiv is really worth seeing! And we have already picked up 5 locations which we recommend to start from!

It is worth starting from the main square of Kharkiv and the sixth-largest square in Europe. The population of a small town will easily fit here. From 100 to 350 thousand people may gather here for concerts. Construction of the monumental square began after Kharkiv was declared the capital of Ukraine. The planning of the city is built starting from it.

Here, on Freedom Square, there is Gasprom, which is the tallest building in the city. Together with the tower, it extends to the sky for as much as 180 m. There are more than 4.5 thousand windows in this building. Construction of it began in 1925, and back then it was a real miracle of industrialization.

2.Gorky Park and the cable car

Gorky’s family amusement park has become a real local Disneyland. It is full of attractions and other entertainment, places for rollerblading and skateboards, lakes, and just cozy alleys. Most recently, it was an unremarkable typical park, but after a large-scale reconstruction in 2014, it became a favorite of citizens and tourists. At the far end, you will find a cable car that can take you to another very interesting park, the Sarzhin yar with a mineral water pump room and a pool.

This is the name of the Victory Monument, which is now present on all postcards and magnets. Next to the charming gazebo there a fountain. Due to the mirror surface of the water in its pool, the monument got its popular name. By the way, relatively recently the Dzerkalnyy (Mirror) Stream was restored in honor of its sixtieth anniversary. This fountain is placed in the square with the same name, Victory Square.

The other name of it is just Gorsad and starts almost from Freedom Square. This is the oldest park in the city, which was laid in 1804. And none other than Vasyl Karazin, the founder of the most famous Kharkiv University, did it. Later on, an astronomical observatory was built here, and in 1896 they palace here the oldest zoo in Ukraine. In 1935, a huge monument to Taras Shevchenko was erected, and the garden received its modern name. It is now decorated with a central fountain, a cascade fountain, a mass of sculptures, monuments, and memorials.

Feldman Ecopark is a huge charity project to help animals. In essence, it is a large zoo with a lot of volunteer organizations, a research base, educational centers, and therapy centers for children with special needs. There is also a unique rehabilitation center for bats. Surprisingly, the entrance to the eco-park is absolutely free. You can get there by special vehicles from several metro stations. But even more convenient it is to get there in a rented car. You will not be tied to time and inconvenient routes. And in the fleet “Ukr-Prokat” we will definitely choose the car that you need!