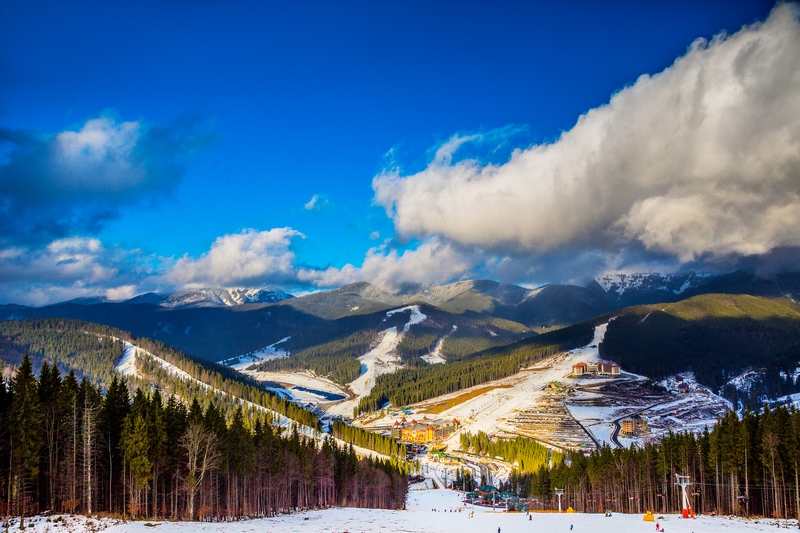 Bukovel is the largest ski resort in Ukraine, located near the village of Polyanytsya. This is the Ivano-Frankivsk region, on the way from Yaremche. The resort is located directly in the mountains at an altitude of 920 meters, and the highest point is 1372 m. This is Mount Dovga in the Gorgan massif. Its southern and northern slopes are quite steep, but the western ones are not. In 2012, Bukovel became the fastest growing ski resort in the world.

Getting to Bukovel is the most convenient to get by car. So as not to waste time on getting there,  the entire fleet of Ukr-Prokat in Bukovel is at your disposal!

How did it all begin?

The history of Bukovel began just 20 years ago, in 2000. In 2001, the first 691 m long cable car was put into trial operation. A steam chairlift and new slopes were developed at the same time. In 2004, a ski lift for skiers and snowboarders was launched.

From 2003 to 2011, the number of vacationers in Bukovel increased from 48 thousand to 1.2 million daily visits. Among the guests, there are a lot of foreign tourists. Despite the difficulties with property rights associated with the privatization of PrivatBank in 2016, Bukovel continues to grow. Now there are a lot of accommodation options, multi-story car parks, and restaurants for every taste.

Initially, Bukovel was designed as a ski resort, so they developed trails and lifts. But since 2008 the active development of the health direction has begun. Due to the availability of mineral water sources, it was possible to create a full-fledged balneological center. Now it is equipped with the most modern diagnostic and medical equipment.

It helps people with musculoskeletal disorders, as well as gastrointestinal diseases. Everyone can get mineral water in a free pump room. In addition, there are vats with mineral water and herbal medicine.

About 68 km of trails with snow cannons are equipped for skiers and snowboarders in Bukovel. They are located in the mountains Dovga, Bukovel, and Chorna Kleva. There are options for beginners and extreme “black” trails. Most trails are of medium difficulty. Due to the snow cannons, the snow cover is safe to be used from November to the end of April. Several trails are equipped with additional lighting.

The capacity of 16 lifts is 34,700 people per hour. There is a snow park, rental points, and a ski school. Triathlon tournaments were held in Bukovel. More and more often cycling fans come here, regardless of the season. The slopes can accommodate up to 12,000 people at a time, and there will be enough space for everyone.

Contrary to stereotypes, Bukovel is not just a winter vacation. In the warm season, there is also plenty of entertainment for all tastes. Eco-tourism is actively developing, there are many tourist routes. Here is the largest artificial lake in Ukraine. Its area is 6.8 hectares. Beach, water heating, and fishing areas are there. You can ride horses or go on a jeep tour, there is a bike rental and a climbing wall. There are playgrounds, gazebos, billiards, bowling, extreme park and children’s clubs.