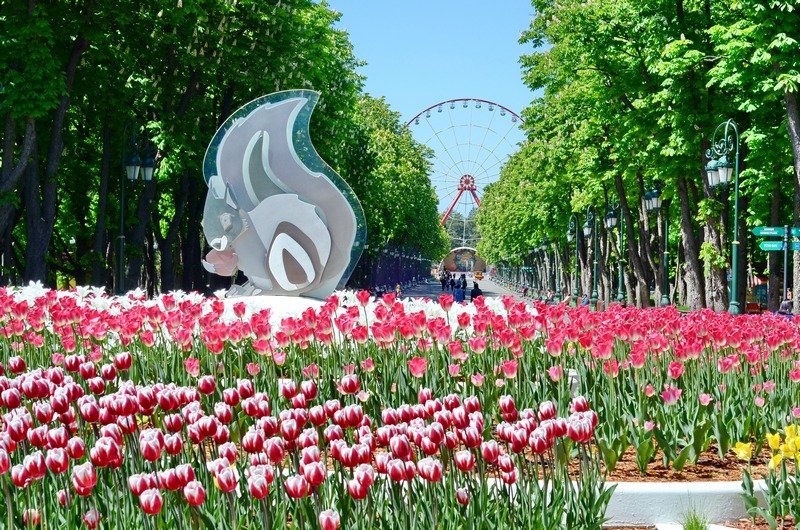 Kharkiv is one of the largest and most densely populated cities in Ukraine, the former capital, and a major center of modern business and cultural life. Although the city is quite young and there are not many historical monuments in it, modern Kharkiv will find something to surprise you with!

Nowadays Kharkiv can be definitely called one of the greenest cities in Ukraine due to the extraordinary beauty of parks and squares. First of all, it is recommended to visit the park named after Taras Shevchenko or also called the former city garden in the heart of the city. The Botanical Garden is about 70 years old. A long and unusual cable car leads to the green Sarzhin Yar, which is modernized according to the projects of talented architects and landscape designers. Besides, Kharkiv Park is the largest one in Ukraine and has got a territory of about 2,000 hectares.

That is the name of the Gorky Central City Park, which has been growing and developing really fast in recent years. It might be said that there is no better amusement park in Ukraine now. There are a huge number of attractions, a 55-meter high Ferris wheel, a cable car, skate, and roller skating rinks, and this is just the beginning of all the fun you may see there. The territory is divided into thematic quarters: for children, extreme, medieval, retro, etc.

Kharkiv Zoo is the oldest one in Ukraine. It has been in the city center since 1896 and has got more than 7,000 animals and 400 species. Nearby, there is a dolphinarium with an aquarium and a bizarre fountain with monkeys. Feldman Ecopark is a unique phenomenon and another Kharkiv zoo. The huge volunteer project combines a giant research and education base, therapy for children, and help for animals. There is even the only one on the territory of Ukraine the Bat Rehabilitation Center that can be visited by tourists. Also, you may feed the bats there. In addition, the eco-park is absolutely free of charge. The only difficulty is the road. You may use the subway free of charge, but we recommend not to complicate your life and rent one of the cars in advance in the fleet “Ukr-Prokat”!

Kharkiv the city of fountains and sculptures

Almost all over the city there are beautiful fountains, which give healing coolness in summer. There are a lot of sculptures and monuments everywhere. There is even a sculpture garden. The most popular and recognizable fountains are the fountain on the Railway Station, the Mirror Stream, the Fountain of Lovers, the Cascade, the Olympic Fountain, and the fun fountains in the Gorky park.

The largest area of ​​Ukraine

The Freedom Square in Kharkiv is one of the largest in all Europe since it occupies as much as 12 hectares. The planning is impressive, and this is actually the place, where the biggest concerts and events take place. Despite the Soviet past, the architectural composition still looks very impressive. Next to the square, there is the building of the State Industrial Complex, a grand and monumental monument that dates back to Soviet times. Its outlines are the most recognizable business card and symbol of the city.

Top 15 largest markets in the world

In Kharkiv, there is the Barabashovo market, which is among the top 15 largest in the world. It occupies more than 75 hectares and more than 20 thousand shops. There are just 16 parking spots on its territory. The market has an infrastructure of a small town: its own medical center, police station, fire brigade, banks, and even its own newspaper.