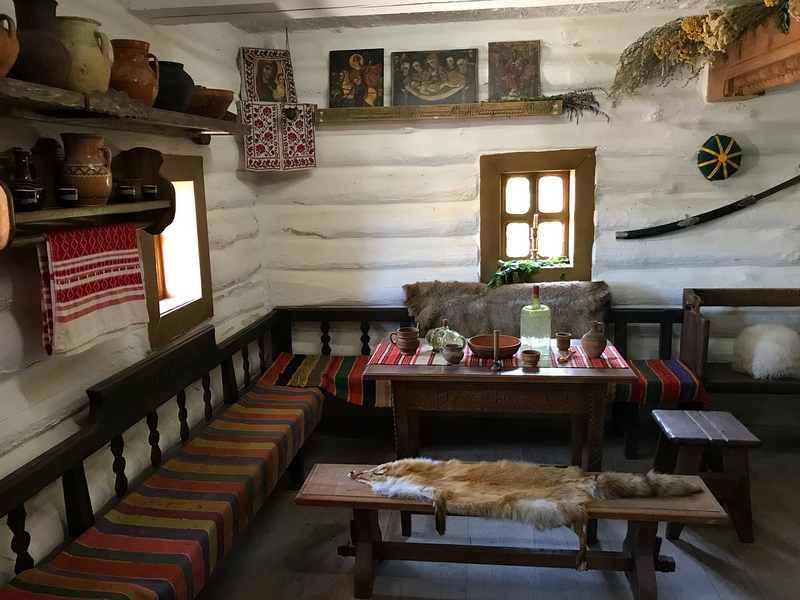 Zaporizhian Sich is a unique historical and cultural complex that fully represents the atmosphere, life and lifestyle of the Cossack’s capital. The idea to recreate the spirit of the glorious 16-17 centuries dates back to 1965, but complex began to be rebuilt only in the autumn of 2004. The unusual town became possible to fit organically into the natural landscape of Khortytsia Island.

The Zaporizhian Sich complex is not an exact restoration of a certain, but rather a collective image of all the Cossack Sichs of that period. The creators united the brightest, colorful and interesting elements of the culture and architecture of the Zaporizh Cossacks.

The real Zaporizhzian Sich changed its location, depending on the era and historical realities. Sometimes even the creators of the next Sich did not know exactly where the previous one was. Scientists believe that there were about 8-10 such places. They were located in the lower stream of the river Dnipro in such places where it was easier to control the invasions of enemies. The historical Siches lasted about two and a half centuries. Each of them was from 5 to 40 years.

The Plan of Zaporizhian Sich

According to the ancient tradition, the Zaporizhian Sich is divided into two parts: the inner central  Kosh and the suburbs with handicraft and trade points. All defense and fortification buildings, observation towers, southern central entrance, and bell tower are restored. Only the scale is a bit smaller.

In the inner city Kosh, there are located the main infrastructure facilities: a powder cellar, kurens (cossac’s houses), and a Sich school. In the center there is the Maidan with  the temple of the Protection of the Holy Mother. That is the highest and most notable building on the island.

On the other hand, there is the office, the treasury, the house of the otaman and the exhibition halls. For example, an exposition that is dedicated to Cossacks’ crafts.

In the suburbs, there is a hotel, a tavern, a potter’s and a forge. You can even try and create a memorable souvenir with your own hands there.

What can you see there?

Besides the Zaporizhzhya Sich on Khortytsia there are other interesting sights:

In order to get to the Zaporizhzhian Sich from Kharkiv, you can take a bus or book a central excursion. The distance is about 300 km. But it is more convenient and much faster to go by car. If you do not have your own car, do not worry. You can always rent a car in Kharkiv in our company. The company “Ukr-Prokat” has a large and varied car fleet for every taste.