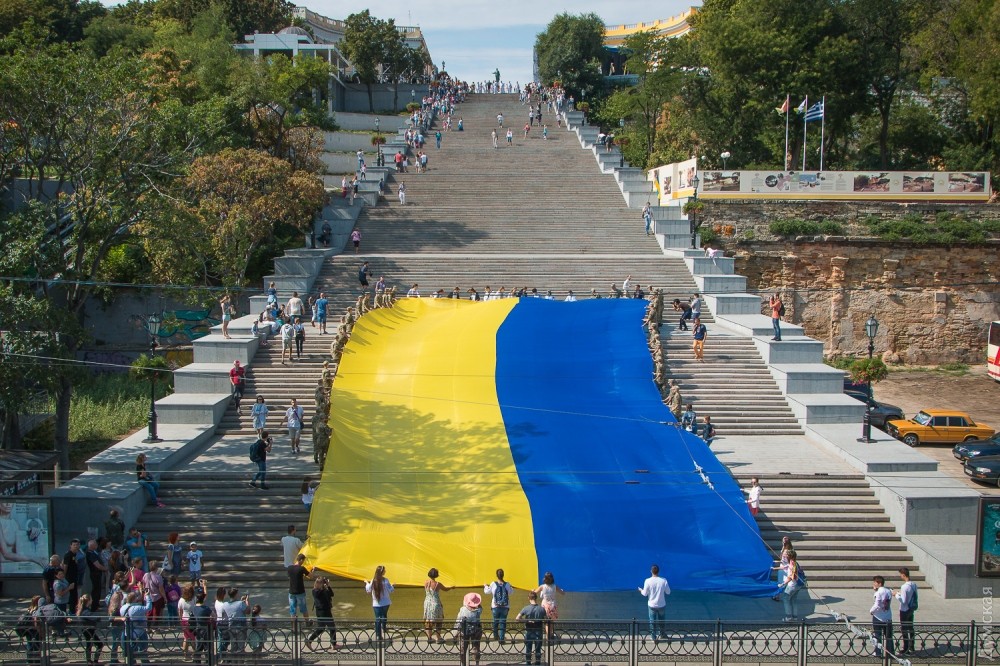 Potemkin Stairs in Odesa are a monumental structure in its own way. They are associated with many stories, mysteries and peculiar facts.

– Potemkin Stairs were designed in 1825. Several architects were involved: Abraham Melnikov, Francesco Boffo and Potie. Their practical objective was to connect the upper part of the city with the port. Conceptually, they had to rise from the blue waves of the sea to the blue skies. The project counted 200 steps separated by 10 landings. Moreover, the basis of the stairs was devised much wider than their upper part to achieve an interesting optical effect. If you look at the stair flights from above, there is no feeling that the stairs narrow. Landings are not visible from below and so the stairs appear endless.

– Today 192 steps have been preserved. The lower flight counts 13, the second one comprises 19. Several steps were “devoured” by Primorska street. They had to be engulfed for its construction. The stairs were covered in granite during reconstruction in 1933.

– According to one of the city legends, under the stairs there’s an underground passage leading to the Vorontsov Palace. Others believe that under the arches there are hidden treasures of smugglers and even jewelry of Mishka Yaponchik (Mishka the Japanese).

– During the construction of this huge structure, there was a popular joke that this expensive and pointless whim of count Vorontsov is needed only so that the bronze Duke [monument above the stairs] could finally get down to the shore.

– Odesa wouldn’t be Odesa if its citizens didn’t go on taking all things with their signature humor. For example, there’s an annual marathon up the stairs. The latest record is 22.8 seconds. The legendary Odesa athlete Sergey Utochkin in his time made his mark by going down the stairs on cars, motorcycles and bicycles. Participants of the first Odesa Humorinas [humor competitions] in the 70’s drove down the stairs in Zaporozhets cars.

Potemkin stairs occupy the 6th place in a rating of the most beautiful stairs in Europe. The jury included well-known historians and art historians from different countries. In 2015, during the Odesa Film Festival, the European Film Academy awarded them with the title “The Treasure of European Cinema Culture”.

– Nowadays still, Potemkin Stairs are often chosen as a location for various events. It is used as a stage for concerts and fireworks, decorated for the city day, film screenings are held here (the stairs are used as one of the locations of Odesa Film Festival), and finally, it is a permanent meeting place of various clubs.

– Writers and poets mentioning Potemkin Stairs are virtually countless. They made an unforgettable impression on Mark Twain, who wrote about them in his road novel The Innocents Abroad. Jules Verne was also impressed calling them monumental in the novel Kéraban the Inflexible. Josef Krashevsky, Alexander Ostrovsky, Vissarion Belinsky, Ivan Nechui-Levytsky, Alexander Green, Valentin Kataev, Alexander Kuprin, Leonid Utiosov and many others talked about them.

For a lovely trip, free of inconveniences of public transportation, and to be able to go around traffic jams when on work trips, rent a car in Odesa at the Ukr-Prokat company. We have a large car fleet, affordable prices and beneficial terms!